Interview with Don Carpenter. We cover everything from his recent T.R.O and troubles with trolls to his opinions on Steubenville.

Was There An April Rape?

I found these on of course Radionewz and I wonder if there was an April rape originally not reported?

END_OF_DOCUMENT_TOKEN_TO_BE_REPLACED

Oh Murt! The Politics Of Blogging! 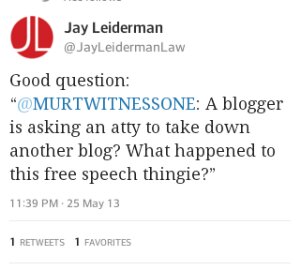 Murt’s once again jumping into something he knows nothing about.

Radio and a few others on both sides are requesting Local Leaks either be removed or it’s rumors/mistakes be corrected.
Why? Well simply put Local Leaks has the names of innocent minors all over it.
(I’m using initals instead of names of these kids because it has been proven they were falsely accused)

M.S.- Accused of encouraging JD to go out to the first party out of revenge for a break up. It has now been proven she wasn’t in Ohio at the time. She was at a family reunion.

C.K.- Accused falsely because he’s the son of Jane Hanlin.

M.N.- Accused of participating. He might be a douche bag for making that video, but he was not present during the rape. He heard it second hand.

C.S.- Accused of setting J.D. up because she broke up with him.
He took the picture that night of Jane Doe and put it on Instagram, however there is no proof he participated in the rape. There was no “backroom deal” and no charges were filed against him.

Was there a cover up by Steubenville police Department and Jefferson County? Only time will tell. No one has ever come up with solid proof to confirm this.

Jane Hanlin- All I’m going to say about Jane is when she figured out there would be a conflict of interest, she requested The Ohio A.G’s office step in. Good idea.

I could go on and on.

Radio is attempting to do the right thing by getting it taken down. If it stays up it can affect the future of innocent people.

I wonder Murt, are you ok with keeping Local Leaks up?

Radio may not be successful getting this done. There’s a difference between posting false accusations on innocent young adults and using your right to free speech.

Why not be productive Murt and encourage it’s removal?

END_OF_DOCUMENT_TOKEN_TO_BE_REPLACED 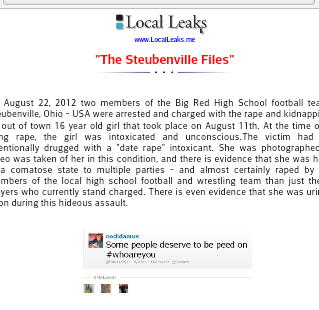 Local Leaks is full of rumors and false accusations. This is proven. Now there have been calls for the owners of Local Leaks and even a lawyer to remove it from the interwebz.

Interesting post on RadioNewz about the famed coach Reno.

Another Steubenville Blog Pops up.

Another blog popped up today claiming to be “For Steubenville.” What remains unclear is who’s against it?

So far zero actual blog entries, but give them time to praise Coach Reno for being a great man who coaches that fine Big Red Football team. At least one or 2 blog entries  will bash people from outside Steubenville as being liars, and a dozen or so will talk about the boys are innocent and the victim just a drunken slut.

How ignorant people are over a month after the trial has ended and Grand Jury begins.

Instead of focusing on the positive,  some are still focused on putting people down. People who were fighting for  justice for a 16 year old rape victim. Would she have gotten any sort of justice had outsiders not stepped in? 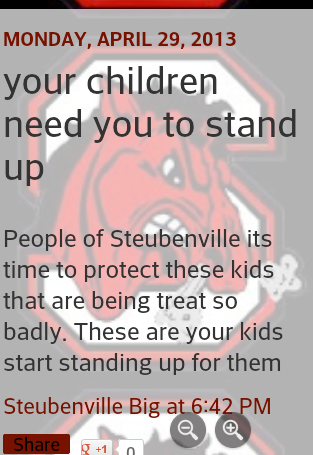 Kids of Steubenville are treated bad? Have they forgotten the rape victim?

The Grand Jury will begin looking at evidence from the Steubenville rape case on Tuesday.

Last month, Ma’lik Richmond and Trent Mays were found delinquent of raping a 16-year-old at a party back in August. More people could be indicted if the jury finds other laws were broken.

Just days ago, search warrants were executed at school board offices, Steubenville High School, Harding Stadium, and a digital investigations company in Medina County. State investigators gathered evidence for the grand jury to look into.

Stay with WTRF for live team coverage throughout the day on
Tuesday.
WTRF7