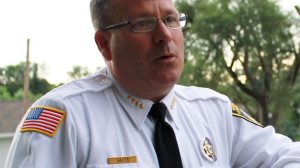 Sheriff Darren White, Nodaway Co. Sheriff is coming under fire for his comments to the L.A. Times.

First his comments about Daisy Coleman not cooperating with the investigation:

“The prosecutor went after this with a fervor,” White told The Times. “It was only when the victims refused to cooperate and assist in this case that he ultimately had to drop the case.”

Before the charges were dropped, White said, Daisy twice invoked her 5th Amendment right against self-incrimination and declined to answer questions about the alleged rape. A 13-year-old girl who also was allegedly raped during the same incident “never showed up any time,” White said.

Coleman said the sexual assault and videotaping charges were dropped before her daughter ever gave a deposition about the alleged rape. She said her daughter never invoked her right not to incriminate herself–to the contrary, she said, Daisy refused to sign a document saying she planned to invoke her 5th Amendment right.

Coleman said her daughter testified at a June 2012 deposition on a separate charge unrelated to the rape case, but the prosecutor, she said, spent two hours grilling the mother not about the incident, but about a woman who had publicly criticized the prosecutor’s handling of the case.

“I don’t remember him asking anything about the case at all,” Coleman said, adding that at one point Rice told her daughter she was “lying.”

Coleman vigorously disputed Sheriff White’s assertion that she had refused to answer questions from fire investigators about a fire that destroyed the family’s home in Maryville after they had moved away. (The cause has not been determined.)

Coleman said that officials from the city of Maryville, Nodaway County and the Missouri State Highway Patrol came to oversee the scene of the blaze.

“I called Highway Patrol, because I was honestly afraid of the sheriff and what they might do, so I wanted to have someone else there,” Coleman said. “I talked to all of them, answered questions from all of them, and the fire chief as well, and I called my insurance company for an additional forensic specialist to look at it.”

This comment pissed off Anonymous and now the Nodaway Co. website is currently offline they say to “protect their servers”