First of all, I would like to point out a misconception about Steubenville as a whole.  There ARE good, decent, hard-working people who live in Steubenville, Ohio who are unfortunately being labeled because of the abhorrent behavior by a handful of miscreants who continue to victim blame and shame Jane Doe on a regular basis.  These good people are also afraid to speak openly about this behavior for fear of retaliation against them or their families, and with good reason.  I have been the target of harassment for over a year by these people.  I can’t say that I blame anyone local for not wanting to speak out against them because they have to live there among these people.  I have also been the subject of a lawsuit filed against my anonymous commenters and myself for speaking out about this case. (copy of lawsuit here)

I have said little publicly about this case for a long time.  I have ignored the insults and hate speech for longer than anyone else would have.  The families of those involved have threatened to sue me for what amounts to nothing more than internet butt hurt for the past year now.  I have been accused of being everyone on the internet that speaks out against them and they have harassed, targeted, intimidated and shit talked my family, innocent friends and myself for over a year.   Their hatred of me has become a very sick, unhealthy obsession. I am reminded of the question I asked myself on August 22, 2012 when I first read about this case:  Why would these kids act this way? The answer is very clear:  Look at the examples they have in their lives.  They have adult role models in their lives who bully, harass and intimidate others for speaking out, so why wouldn’t these kids opt instead to do nothing but shame, blame and bully Jane Doe on social media?

I am not a US citizen.  I am a German immigrant who proudly lives in this country and loves everything about America.  I have been a staunch defender of the right to free speech and vehemently fought for the rights of my anonymous commenters to remain anonymous when we were sued by the family of Cody Saltsman with regard to the Steubenville rape case.  I could have had the attitude every man for himself when I was sued, but I didn’t.  I rallied behind my John Doe defendants and ultimately was able to enlist the assistance of the ACLU to represent them so that anonymous speech was protected; and more importantly that their identities were protected.  Even as an immigrant, I am entitled to “unalienable rights” as afforded by the Constitution:  the protection of “Life, Liberty and the pursuit of Happiness”.  Over the past year, I have been a target of hate speech; I have been hunted like an animal by individuals wishing to expose where I live, where I work or who I may have relationships with.  Why?  Because I wrote about a rape case involving their not so compassionate children.  I have purposely not disclosed where I live because these people are unhinged, and people with stalker obsessions are capable of doing bad things.  So, yes…I am in hiding.  NO ONE should have to live like this.  They are so hell bent on destroying me as a person that they have and continue to inhibit my right to earn a living and the right of those who may work for me to earn their living.  Because of their behavior and absolute intent on destroying or causing me physical harm, I am not even in a position to file a police report…because that would disclose my location and potentially put me in danger.

The Harassment From Judicious1_ Continues

END_OF_DOCUMENT_TOKEN_TO_BE_REPLACED

I’ve been away for awhile, but I decided something needs to be addressed.

Stalkers of Steubenville-
I’ve noticed the infamous Judicious1 and her followers are stalking a person who’s been seriously ill.

Some tweets I’m reading suggest people actually showed up at her home where her 2 small kids live. Unacceptable.

They don’t discriminate. They also pick on Adam Social for a website he made in 2007 and admits openly it was in poor taste. 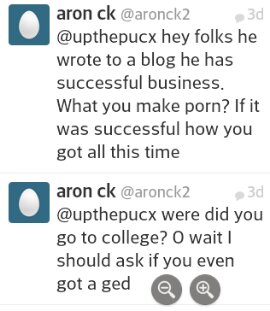 Need I say more? These idiots will not stop. I ask that everyone stop responding to these hags with no lives. It gives them the power.

Steubenville is a good town with good people. These sub humans of Steubenville do not represent the entire town.

Let this blog entry be a warning- You will be outted. #Ticktock