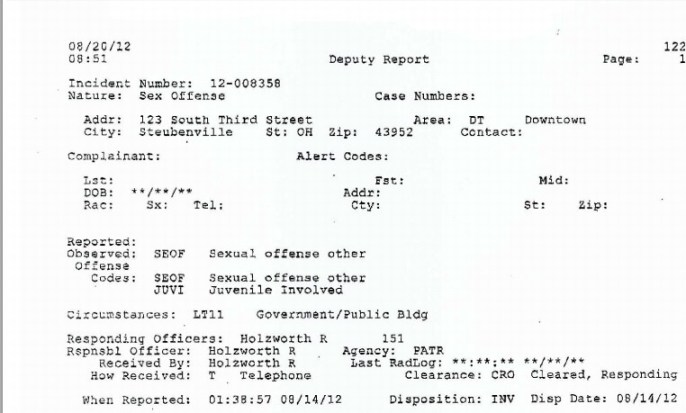 Regarding whether to keep the trial open or closed to the public, the only written motion that was ever entered for a motion for closure was filed by defense attorney Walter Madison — and he withdrew that motion today.

Prosecutors from the Ohio Attorney General’s Office didn’t file a written response, but said in open court they would like the trial closed to the public and the media. Prosecutors said their position since the original probable cause hearing has changed, and they want the trial closed.

Judge Thomas Lipps also listened to attorneys representing different media outlets who argued why they feel they trial should be open to the public.

Attorney Justin Wiater with Fitzsimmons Law Firm is representing the teenage girl who is the alleged victim on a civil basis. Wiater said he asked the judge to allow them to file a motion if necessary to argue their point to close the trial. However, he said he didn’t know if he had standing to file that motion.

The judge is expected to make a ruling next week about whether to keep the trial open or closed to the public.

Both defense attorneys also motioned for a change of venue. The defendants’ attorneys argued that threats to witnesses are their main concern about changing the location of the trial.

Defense attorney Adam Nemann said that he would prefer a court with more law enforcement presence in addition to several entryways for witnesses to enter without fear of protesters wearing masks and threatening them.

Madison also brought up threats made to the sheriff, police chief and the school in his argument to change the trial’s location.

Both of the defendants’ attorneys also filed motions to continue the trial, arguing that they continue to receive new information that would be admissible in court.

State prosecutors argued that the information being brought up currently would not change the facts in the case.

Looks like Madison is enjoying his 15 minutes of fame.

By NEWS9 and The Associated Press

COLUMBUS, Ohio — The state attorney general, the lawyers for both of the defendants and a 16-year-old accuser and her parents are all pressing a judge to close the rape trial of two Steubenville High School student-athletes.

Ohio Attorney General Mike DeWine is the latest to file the motion. Local court officials said they had not received word of DeWine’s motion as of 5 p.m. Wednesday, and a hearing is scheduled for Friday before Judge Thomas Lipps on all of the motions.Several news organizations, including WTOV9, are urging a judge to keep the trial open to the public.

The media’s filing in Jefferson County Juvenile Court on Wednesday said the media have a well-established constitutional right to cover such hearings.

The news companies said that openness is the best way to ensure public confidence in the proceedings. The Associated Press further said it’s important to fully understand what happened the night of the alleged assault in August in Steubenville so measures can be taken to protect other young women in the future.

On Tuesday, Robert Fitzsimmons, the attorney representing the teenage girl in the case, asked for the case to be closed because, he said, closure is the only alternative that can protect the girl from improper use of inadmissible evidence that is “either proffered, tendered to argued in open court.”Fitzsimmons further said in his motion that “counsel and the parents request their right to hear the testimony which involves the parents’ daughter sand counsel’s client. Jane Doe is not requesting to be present throughout the proceedings.”

Is Jane Hanlin A Scape Goat?

I was tweeted a link to this letter to the editor. 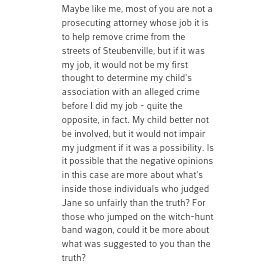 After reading this, I wonder is Jane taking the heat, so-to-speak over the Big Red Rape Investigation?

Well, let’s see:
*Before turning the case over to the Ohio’s AG’s Office, she had the case for 2 weeks. She decided to turn it over only after her son was implicated as part of The Rape Crew.

*Is it a coincidence that her husband is a detective where? No other than Steubenville P.D.

*The Jefferson County Sheriff’s Office collected 3 cell phones. One of them had pictures of the victim, Trent Mays. BCI investigators said when pictures are deleted, the operating system can’t recover deleted media. Well, according to what I’ve read, its a bunch of bull. I’ve also heard DOJ offered technical assistance with this.Is it a coincidence that the BCI investigator is also friends with Hanlin?

*Hanlin now has a “spokesman.” Who was her lawyer during her divorce case? No other than her “spokesman” Frank Bruzzese.

*Jane served on the Steubenville School Board with Bruzzese’s wife.

*With so many attachments to this case, why did it take her so long to reccuse herself?

*Jane worked in Frank’s law firm before she became the D.A.

Is Jane a scape goat? Well, some of her actions were considered unethical.

Maybe Jefferson County needs to think about it before re-electing her.

Rally In Steubenville “For The Youth”

A rally was held on Saturday in Steubenville. Listen to the language- Is this against violence or inciting violence?
Seems to me this “rally” was a “rally against Anonymous.”

Now a REAL rally for Steubenville is being organized.
Feb. 2nd at Noon in front of The Jefferson County Courthouse.
Wear The Big Red colors. Its a celebration for the good and hard working people of Steubenville.