MARTINEZ (CBS SF) – One of two juries in a dual trial against two young men accused of taking part in the brutal 2009 gang rape of a 16-year-old girl on the Richmond High School campus has reached a verdict.

The jury for 20-year-old Pinole man Marcelles Peter reached a verdict in the trial around noon. Both he and Jose Montano, 22, of Richmond, are charged with rape in concert, oral copulation in concert and sexual penetration with a foreign object along with special allegations of inflicting great bodily injury. 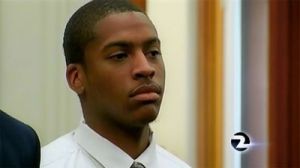 If Montano’s jury doesn’t return a verdict by Thursday, the verdict for Peter will be read that afternoon, a court clerk said.

Two separate juries were deliberating at the close of a dual trial against Montano and Peter,  the first defendants to stand trial in connection with the October 2009 gang rape, in which the teen victim was raped and beaten over a more than two-hour period in a darkened courtyard at Richmond High, according to prosecutors.

Two other men, Manuel Ortega, 22, and Ari Morales, 19, are serving 32-year and 27-year prison terms, respectively, for their roles in the rape after reaching plea deals with the Contra Costa County District Attorney’s Office.

Earlier this year, two juries were selected for the rare dual trial against Montano and Peter. The two groups heard most testimony during the trial together, but other parts, including closing arguments, were heard separately.

Former Santa Clara County Prosecutor and legal analyst, Steven Clark said each jury has its challenges and may send the men to prison on charges of aiding and abetting rape, even if they never touched the victim.

MARTINEZ — The last known witness for the prosecution in the Richmond High School gang rape dual jury trial testified Monday that DNA from both defendants was recovered from the crime scene.

Peter, 20, and Montano, 22, are each facing life in prison if they are convicted as charged in connection with the Oct. 24, 2009, assault on a then-16-year-old girl in a dark campus courtyard during a homecoming dance. Questions that their attorneys lobbed at Stockwell on Monday focused on the integrity of the evidence collection and testing processes, and possible scenarios as to how their clients’ DNA could get on the objects in an effort to raise doubt with jurors.

The lab spent a year testing all the biological evidence against DNA samples that police collected from the victim, the seven men and boys originally charged in the case, and another six men and boys who were identified as witnesses to the assault.

From the victim’s body, authorities identified sperm DNA from Crane, Ortega and a male who has never been identified by police, Stockwell said.

Stockwell said he could not say whether Peter’s genetic material retrieved from inside a sperm fraction sample on the condom came from Peter’s sperm. It is possible, he said, that Peter’s non-sperm DNA, which was also found on the condom, crossed over into the sperm fraction.

Crane’s sperm was recovered from that same condom, as well as on numerous parts of the victim’s body, on stains on other suspects’ clothes and on various objects found at the crime scene, according to Stockwell.

Montano’s DNA on a condom wrapper was of the non-sperm variety, Stockwell said. Both Peter’s and Montano’s DNA were also found on an alcoholic beverage can.

Prosecutor John Cope began presenting witnesses June 4, and Stockwell is his last witness unless he chooses to call a rebuttal witness to contradict testimony by any defense witnesses

“I Backed Off,” Defendant Testifies

Richmond High school gang rape trial defendant Marcelles Peter told police that he touched the victim’s “private area,” but didn’t foresee the girl getting raped, and beaten, according to a police interrogation video to the 20-year-old Pinole Man’s jury.

“I don’t think I should be in trouble for this because I didn’t know what was going to happen,” a 17-year-old Peter told detectives in 2009, a few days after a 16-year-old sophomore was raped and beaten on the school’s campus after leaving a homecoming dance.

END_OF_DOCUMENT_TOKEN_TO_BE_REPLACED

A young man previously convicted in the group rape of a 16-year-old girl four years ago testified against two other suspects on Thursday.

Ari Morales, 19, never testified during his own trial in January. His comments last week marked the first time his version of events has been recorded in court. The testimony is part of a new trial against suspects Marcelles Peter, 20, and Jose Montano, 22, both of whom were charged with rape, rape with a foreign object and forced oral copulation.

END_OF_DOCUMENT_TOKEN_TO_BE_REPLACED

MARTINEZ — A 22-year-old man convicted in the 2009 Richmond High School gang rape testified Thursday that he saw his former co-defendant Jose Montano on top of the 16-year-old victim for “like two seconds.”

“Two seconds, three, four, five — it wasn’t even a minute,” said Manuel Ortega, who’s serving a 32-year prison sentence at Mule Creek State Prison for the Oct. 24, 2009, attack in which a sophomore girl was beaten, raped and otherwise sexually abused for as much as 2½ hours in a dark campus courtyard after she left the school’s homecoming dance and drank a near-fatal amount of brandy.

Montano, 22, of Richmond, and 20-year-old Pinole resident Marcelles Peter are on trial on gang rape charges that call for a life prison sentence. Ortega is one of two former co-defendants who took a plea deal that requires him to testify at all future proceedings.

Ortega on Wednesday testified that Montano “raped” the girl. On Thursday, it was less clear what exactly he saw.

“He was on top of her for two seconds, and he just left,” Ortega said. He noted that he saw Montano go “up and down.”

“Did you see his pants down?” an attorney asked.

The testimony is crucial to Montano’s defense, which is that he got on top of her but didn’t have sex with her or even unzip his pants.

In trial opening statements, prosecutor John Cope told the jury that there will be testimony that Montano’s DNA was found on a condom wrapper retrieved from the crime scene, and that he was seen running around saying, “Where’s that condom?” after raping the girl.

Ortega was a 19-year-old Point Richmond resident when he was arrested running away from the crime scene with the victim’s DNA on him. He had dropped out of Treasure Island Job Corps two years earlier and was scraping by panhandling and stealing things that he could sell, he said.

He said he would frequently hang out and drink in the Richmond High School courtyard; he didn’t know that there was a dance happening that night until after the fact.

Over his two days of testimony, he admitted to ripping off the victim’s clothes after she fell down drunk, trying to force her to give him oral sex, and hitting her and dragging her around the courtyard with Ari Morales, who also took a plea deal. He said he did not see Peter at the scene.

However, Ortega’s testimony was not without inconsistencies.

When asked how many people raped the girl, Ortega replied, “Just two, me and Jose.”

But then when asked immediately afterward whether he raped or had sex with the girl, Ortega said, “No.”

Ortega repeated that he was “very drunk” that night and that he wasn’t in “a right state of mind” when he gave his statements to police.

“So if you are forcing oral copulation within a minute of someone raping her, you don’t think you have anything to do with (the rape)?” Cope asked.

Manuel Ortega Being Escorted Back To Jail After Testifying On June 11,2013.

Jurors heard disturbing testimony Wednesday from police officers who were among the first to see the aftermath of a 2009 gang rape following a homecoming dance at Richmond High School.

One officer said that at first, he wasn’t even sure the victim was alive.

END_OF_DOCUMENT_TOKEN_TO_BE_REPLACED 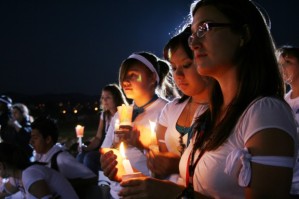 Richmond, California– known for the movie “Coach Carter.” In the last few years, Richmond has been known for a brutal gang rape of a high school sophomore girl outside their Homecoming dance in 2009 that could come from a bad movie or an episode of a crime drama on network TV.