I think Murt has finally gone full on crazy! In the last day or so he’s claimed his girlfriend Brianne (Holly Brilley’s stalker) did not make certain comments on Radionewzblog. He claims Radio came out today and said Brianne couldn’t have made the comments. Radio never said this.

This is the ENTIRE comment from Radio. NO WHERE does it say Brianne couldn’t have made the comment.

SO MURT- What say you? I’ve been waiting for you to prove your theories, but it’s just proven you’re a liar and you’re crazy! 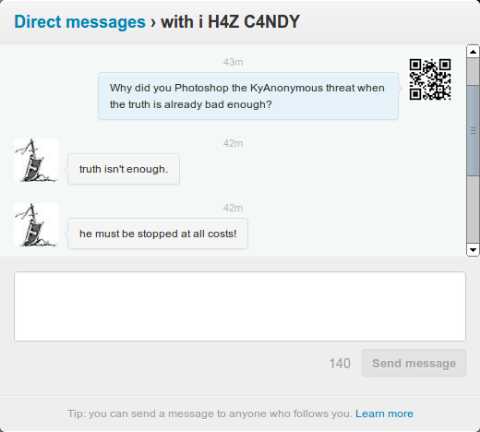 The pictures speak for themselves. Is this a victim?

Ihazcandy has manufactured screen shots to get @kyanonymous Twitter account suspended and now claims he was sent an e-mail with threats against his family.

Ihazcandy has not produced a screen shot to prove it was emailed and not just written up by him or his pal Dj Dave Ott.

These are the screen shots. He can’t prove this was E-mailed by an Anonymous member or in particular members of #knightsec.

Ihazcandy has manufactured screen shots in the past, why would he suddenly be honest?

-He’s from Steubenville, Ohio where there was allegedly a cover up of a rape by football players last August.

-He was Doxed by #knightsec and kyanonymous. Dox of Ihazcandy