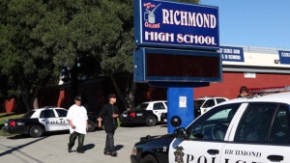 RICHMOND (CBS/AP) – A federal investigation of the West Contra Costa School District revealed a widespread environment of sexual harassment and assaults by students that district officials failed to adequately address, the U.S. Department of Education said.

The determination came as the Department of Education’s Office for Civil Rights announced its agreement Wednesday with the district to ensure compliance with Title IX, a 1972 law guaranteeing equal gender treatment, and reduce future instances of harassment or sexual violence.

“I am dismayed by the prevalence of sexual harassment and assault occurring at elementary and secondary schools in West Contra Costa,” Catherine E. Lhamon, assistant secretary for civil rights, said in a written statement.” Although the district frequently reported known incidents of sexual assaults to law enforcement for prosecution, the district did not fully comply with its legal obligations under Title IX to take immediate actions to eliminate the harassment, prevent its recurrence, and address its effects, and to put proper procedures and protocols in place.”

The probe uncovered instances of sexual assaults, unwanted touching and demands for sexual favors as well as the use of sexually derogatory language that created a hostile environment within the district. It also added that students were subjected to sexual harassment by employees

As part of the agreement, the district will provide sexual harassment-prevention training and will create a task force to identify ways to reduce sexual violence. The district is comprised of 30,000 students in 37 elementary schools, six middle schools and six high schools.

The investigation began in 2010 after the brutal,2009 gang rape of a teenage girl outside of a homecoming dance at Richmond High School. Four men have been convicted and two others await trial.

The victim received $4 million to settle a lawsuit against the district in 2010.

The district said in a written statement released Thursday that while it has made significant progress, more needs to be done to make schools safer.

“Sexual harassment and gender-based harassment can be significant impairments to student learning and can leave scars that last well beyond the years our students spend in school,” the district statement said. “We’re undertaking the (agreement) with a spirit of full commitment, not only to the individual steps that are in the agreement, but also to changing the culture in our schools and communities.”