Hopefully no more rallies will be necessary for this Op.

Thank you to all those who stood up for Baby Jane Doe and her family. 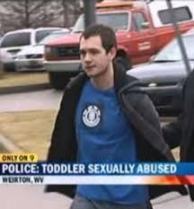 NEW CUMBERLAND – A rally is being planned for Saturday in connection with the case of a Weirton man accused of sexually abusing a child.

Tyler M. Graham, 19, of Weirton was arrested in February for allegedly raping a 2-year-old girl in December.

The rally is being organized by members of Internet “hacktivist” group Anonymous and its supporters, and will take place at noon Saturday in front of the Hancock County Courthouse, 102 Court St. The group is protesting Graham’s reported release from prison while he awaits trial.

Graham was indicted by a Hancock County grand jury in April and faces charges of sexual assault by a custodian, sexual assault in the first degree and child abuse resulting in serious bodily injury.

The alleged incident is said to have taken place while Graham was staying at the girl’s mother’s residence in December, according to Hancock County Prosecutor Jim Davis.

Weirton police began an investigation on Feb. 8 when they were called to Weirton Medical Center on a report of possible sexual assault involving a child. Reports indicate the child had contracted a sexually transmitted disease and required surgery.

A rally also was held on March 2 after Graham was released on a $50,000 bond following initial hearings in Hancock County Magistrate Court.

Greetings. On Saturday, June 1, 2013 at high noon, Anonymous will host a rally at the Hancock County Courthouse, 102 Court St New Cumberland, West Virginia in support of Baby Jane Doe and the good citizens of the Ohio Valley. Anonymous is deeply troubled by the release of alleged baby rapist Tyler Graham. All citizens should feel the same way. Will it be allowed to continue with no outcry? No, it will not.

END_OF_DOCUMENT_TOKEN_TO_BE_REPLACED

Tyler Graham was charged by City Police on Tuesday with raping the toddler.

Police said the child’s mother had taken her daughter to the family doctor for help with what appeared a case of diaper rash. The pediatrician, however, examined the child and referred her to a gynecologist. The mother took her daughter to a local hospital, and personnel there notified police of the suspected sexual abuse.

This Saturday at noon, local organizers, including Anonymous have organized a rally in support of this, and all victims of sexual assault.

The rally will be held at the Hancock County Courthouse in New Cumberland, WV. Victim’s advocates, concerned citizens, and Anonymous are expected to speak.

Weirton, WV is just a ten minute drive from Steubenville, OH,  where a trial is set to begin on March 13th for two teenagers, accused of raping a young girl, coincidentally from Weirton.