The trial of the man accused of giving a two-year-old and STD began on Monday.

He plead not guilty to all three.

A public outcry was heard in the case when Graham was granted bail when the case first broke in February. A rally was held by the group Anonymous in Hancock County in support of the victim in the case, who was referred to as “Baby Jane.”

At the rally, money was collected to donate to the Comfort House in Weirton, which is part of the Hancock and Brooke Counties Child Advocacy Center.

Hopefully no more rallies will be necessary for this Op.

Thank you to all those who stood up for Baby Jane Doe and her family.

After trying all morning to confirm if in fact Mr. Graham is on the run, it is now confirmed he is at an undisclosed location on GPS monitoring. This also confirms he will not have any contact with Baby Jane Doe. It is unconfirmed he is in contact with baby jane doe’s mother.

Thank You Don Carpenter aka @nunyaman for calling the Sheriff.

Do Not Forget The Rally Saturday at Noon To Support Baby Jane Doe.

Is Tyler Graham On The Run? 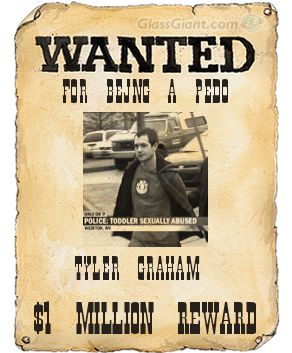 #Opinnocence Rally will be Saturday at Noon. Attend and support Baby Jane Doe.

Greetings. On Saturday, June 1, 2013 at high noon, Anonymous will host a rally at the Hancock County Courthouse, 102 Court St New Cumberland, West Virginia in support of Baby Jane Doe and the good citizens of the Ohio Valley. Anonymous is deeply troubled by the release of alleged baby rapist Tyler Graham. All citizens should feel the same way. Will it be allowed to continue with no outcry? No, it will not.

END_OF_DOCUMENT_TOKEN_TO_BE_REPLACED

The indecency of People

While reading an article on The Big Red Rape Case I noticed a Facebook entry by Deidre Myers.

It’s very unfortunate to see another woman calling into question the rape of a passed out girl.
Saying the girl is a “train whore” who “parties every weekend.” How “stupid she was for partying alone.”

My Question is why would a woman with kids degrade a 15 year old girl who was raped?

Its been established she was drunk, passed out and also estsblished by the 12 min video, pictures and Tweets the boys found nothing wrong with what they did.

This culture of blaming victims needs to end.